Meghan Markle and Prince Harry are taking their son Archie on his first Royal Tour - a 10-day trip to Africa.

The Sussexes kick off their visit on September 23, and the Duke has said he is "very excited" to introduce his family to the country he loves so much.

The family will all visit South Africa together, but Harry will go off on solo trips to Malawi, Angola and Botswana during their trip.

They have a packed schedule including joint engagements and individual trips for both Meghan and Harry.

The Duchess of Sussex will tackle the issue of gender violence on Monday in South Africa after a series of shocking murders of women there.

Meghan will make a speech in a deprived township in Cape Town hours after landing.

The country’s upsurge in violence against women is five times the global average and has been described by President Cyril Ramaphosa as a “national emergency”.

They will focus on key issues of their global charity work including the environment, conservation, education and women’s rights.

During their trip they will be visiting schools and hospitals and Harry will even detonate a land mine, as well as meeting a whole host of interesting people including Nelson Mandela's wife.

However they haven't planned exactly when we will see baby Archie, saying this will be decided nearer the time based on how they are feeling and security.

Harry is extremely passionate about Africa, and has said he's looking forward to taking his family there (Image: WireImage)

Here's the Sussex Family's full itinerary for the trip.

Meghan and Harry will kick off their adventure in Cape Town, where they will watch a workshop that teaches kids about their rights, self-awareness and safety. It also provides self-defence classes and female empowerment training.

They will then go on a tour of the District Six Museum to learn about their work to reunite members of the community forcibly relocated during the apartheid era.

Afterwards they will join a community cooking activity with former residents of District Six at the nearby Homecoming Centre.

The next day the couple will head to Monwabisi Beach to learn about the work of ‘Waves for Change’.

During their time there they will also see the work of The Lunchbox Fund, one of four charities to benefit from the generous donations made by the public to celebrate Archie's birth.

The Fund provides nearly 30,000 meals every day to ‘Waves for Change’ programmes and schools in South Africa’s townships and rural areas.

During the event they will meet Dr Thomas Maes, who is leading the Commonwealth Litter Programme.

The couple will then split for the first time when Harry joins the City of Cape Town Marine Unit to travel by boat to Seal Island, Kalk Bay.

There, he will learn about the important role they play in combatting the poaching of abalone, considered one of South Africa’s most significant illegal wildlife trade concerns which have reached critical levels.

He will then rejoin Meghan and the couple will visit the Bo Kaap area to mark Heritage Day, a celebration of the great diversity of cultures, beliefs and traditions that make up the rainbow nation of South Africa.

They will visit Auwal mosque, the oldest mosque in the country, where they will meet representatives from different faith groups to hear about the strength of interfaith dialogue in Cape Town.

Afterwards, the couple will visit a local resident's home for a cup of tea.

That evening Meghan and Harry will attend their first formal event of the trip, a reception at the British High Commissioner’s Residence.

During the celebrations they will meet inspiring opinion formers and young future leaders, underlining the rich and diverse nature of the UK’s modern partnership with South Africa.

On the third day of their trip Meghan and Harry will meet Archbishop Desmond Tutu and Mrs Tutu at their legacy foundation.

They will then split again, when the Duke travels to Botswana while Meghan and Archie remain in South Africa.

Harry met the Archbishop Emeritus Desmond Tutu during his visit to the country in 2015 (Image: Getty Images)

That afternoon Meghan will visit the Woodstock Exchange to meet female entrepreneurs and investors working in technology.

In Botswana, Harry will travel to Chobe Forest Tree Reserve, where he will join schoolchildren to plant trees and raise awareness of the fragility of these vital ecosystems.

He will then visit a local project run by his charity Sentebale which focuses on improving the mental health of young people affected by HIV.

Harry and Meghan visited Botswana together before their wedding (Image: sussexroyal/Instagram)

From there, he will travel to Chobe National Park, where he will dedicate an area of forest to the Queen’s Commonwealth Canopy.

Situated near the border of Namibia, Zambia and Zimbabwe, this will help link areas of the Queen’s Commonwealth Canopy across borders, to facilitate the passage of wildlife, vitally widening the range of their habitats.

He will then travel to Angola for what is set to be a very moving part of the Royal Tour, a visit to the HALO Trust.

He will see first-hand the legacy of his mum Princess Diana, whose visit to Huambo in 1997 raised awareness of the threat posed by land mines.

Diana, Princess of Wales in the land mine fields in Huambo in Angola (Image: Reuters)

During his visit Harry will launch a new project in Dirico, and will spend the evening at a new HALO Trust demining camp.

Meanwhile, Meghan will attend a private “Women in Public Service” breakfast at the High Commission in Cape Town.

Invited guests have all played a key role in the development of South Africa’s institutions: in Parliament, Government, education and healthcare and continue to advocate for women’s rights and education, as well as gender equality

Harry will have an early start and will visit a working de-mining field outside Dirico.

He will remotely detonate a mine and meet members of the community before giving a speech about the importance of the work.

He will then unveil the unique, three-country Queen’s Commonwealth Canopy project designed by His Royal Highness which includes Angola’s Luengue-Luiana National Park – the site of the de-mining initiative.

Representatives from Botswana and Namibia will join Angolan Ministers to celebrate this collaboration and additional protection for National Parks abutting the Okavango Delta, with the objective of creating safe and green corridors for wildlife and, importantly, communities.

Harry will then travel to Huambo.

He will be met by the Governor of Huambo, Joana Lina, who was also the official host for the late Princess Diana’s visit.

Accompanied by the Governor, the Duke will visit the location where his mother was photographed.

He will see how an area that was a dangerous minefield in 1997 is now a busy street with schools, shops and houses – a demonstration of the benefits of demining.

He will be escorted to the location by a member of the HALO Trust team, Valdemar Gonçalves Fernandes, who was part of the de-mining teams working in the area during Princess Diana’s visit.

He will meet representatives of all three de-mining organisations working in Angola under the UKAid Global Mine Action Programme before making his way to the Huambo Orthopaedic Centre, also visited by his mother in 1997.

The centre’s new name, in honour of Princess Diana, will be unveiled by His Royal Highness, after which he will tour the facilities and make a short speech before departing for Luanda.

In the evening he will attend a reception at the British Ambassador’s Residence where he will meet business representatives and learn about Angola’s economic transformation and business landscape.

We won't see Meghan at all this day.

No Meghan again on Day six, but Harry has a couple of engagements to keep him busy.

He will spend the morning with President Lourenço at the Presidential Palace.

He will then visit the Maternity Hospital Lucrécia Paim to see the work of a project spearheaded by First Lady Ana Dias Lourenço ‘Born Free to Shine’ which focuses on preventing HIV/AIDS transmission from mothers to babies.

President of the Republic of Angola (Image: LightRocket via Getty Images)

Despite Angola’s low infection rate, other factors such as high fertility and a young population, combined with a lack of awareness, are driving infection rates up.

Rates of mother-to-baby transmission are the highest in sub-Saharan Africa.

Harry will then traven to Malawi for the next leg of his tour - his first official trip there.

However he has made several private visits in the past and enjoys close working relationships with partners on the ground.

Harry will arrive in Lilongwe and will visit Nalikule College of Education in the afternoon.

During his visit, he will meet a group of young women who are supported to attend and complete secondary school with the help of UKAid bursaries through the Campaign for Female Education.

He will see the impact of UK investments to ensure that girls obtain at least 12 years of quality education.

The project is supported by the Queen’s Commonwealth Trust of which The Duke is President and The Duchess Vice-President.

He will then meet President Peter Mutharika who he has met on previous occasions.

In the evening, Harry will attend a Reception hosted by the British High Commissioner, which has been set up to highlight our common links and strengthen the meaningful, modern partnership between the UK and Malawi.

On Monday, Harry will fly to Liwonde National Park where he will pay tribute at the memorial site for Guardsman Mathew Talbot of the Coldstream Guards, who lost his life in May 2019 on a joint anti-poaching patrol with local park rangers.

He will then head to the Liwonde National Park Headquarters to receive a briefing on operations.

To conclude, he will dedicate Liwonde National Park and the adjoining Mangochi Forest to the Queen’s Commonwealth Canopy, joining Chimaliro Forest, which was dedicated by The Duke of Gloucester in 2018.

Meghan is back on Tuesday with a solo engagement about education.

She will attend a roundtable discussion with the Association of Commonwealth Universities in Johannesburg, where she will meet academics and students to discuss the challenges faced by young women in accessing Higher Education.

Meghan will rejoin the tour on Tuesday (Image: SplashNews.com)

She will then visit a school to learn about the work of a local charity, which receives UK Aid funding for its work to raise awareness of and tackle sexual violence in schools.

He will go on a tour of the project before flying back to South Africa, arriving back to Meghan and Archie in Johannesburg that evening.

The couple will spend the final day of their trip together, and they have lots of activities planned for their last few hours in the country.

They will visit a township near Johannesburg where they will meet with inspiring local youth, entrepreneurs and view skills initiatives addressing the rising unemployment challenge faced by young people in South Africa.

Graça Machel with Prince Harry in 2015

The Duke and Duchess will together attend an afternoon reception to celebrate the UK and South Africa’s important business and investment relationship, looking ahead to the Africa Investment Summit the UK will host in 2020.

They will meet representatives of the British and South African business communities, with a particular focus on entrepreneurs and the creative industries.

Their final engagement will be a meeting with President Cyril Ramaphosa and his wife Dr Tshepo Motsepe.

Harry, Meghan and Archie will fly back to London later that evening.

Who runs the world? Well girls of course! 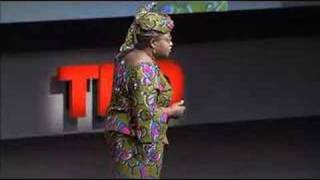 Impossible is NOTHING: here's my plan to change the world.

The thing about African Aid: When help is decidedly unhelpful

The awesomeness that is this guy...

Why investing in Africa is good for UK businesses

Who runs the world? Well girls of course!

Paying it forward...or is it back homeward?

To meet Moses is to understand Positive Afritude

{he}ART of Africa... Stretching the canvas between the UK & Africa!